Wrapped up in Thornton on Valentine’s Day

I still need more of your face/body parts for my FanstRA4 project, so please send them my way!

Thank You! to all of you who have but you! *knocks on the screen*  yeah YOU!

I haven’t got your pics yet!

Send them my way please 🙂

I’ve actually been getting into aromantic mood in the past few weeks, probably due to a need to escape the pressures of RL and exams and such nonsense.

My go-to haven turned out to be North and South, and once again, Mr Thornton kissed and made it all better (although no train stations were involved this time around…).

I tend to rewatch this BBC mini-series about 4 times a year, and when the time comes to pop it into the DVD or my laptop, a girl just knows.

There an itch that only a cravat can scratch.

There are emotions that are forgotten more than a pair of worn leather gloves, and they need to brought to light.

N&S is so much more than merely a love story set in a dirty smokey industrial hell of Milton.

I adore some characters, like the Thornton’s, at the same time I adore to loathe others, like the Hale’s (Yeah, that’s right! I said it! They need to ALL climb out of their self-important arses and get with the Milton program!).

As fulfilling as the series is, I decided to go looking for some fanfics that would prolong my N&S glow.

There’s quite a mixed bag out there, and I was horribly disappointed on more than one occasion when I got terribly involved with a plot (as in 3am and I’m still reading…) only to find out the fic had never been finished.

I’d like to recommend some N&S insipred fanfic, but this is by no means a full list.

Please add any other fanfic recs to comments.

Let’s start off with something a bit saucy.

There are two stories I’d like to recommend, both dealing with the physical aspect of John and Margaret’s relationship after they get married.

I love me some smut, but full-blown slash doesn’t seem to work for these two characters, so I really enjoyed the following stories.

Take Her there with me by Redizded

The story is an exploration of  how things might be between John and Margaret in terms of sexuality, taking into account their passionate nature, but also the strong Victorian inhibitions and rules that undoubtedly would have influenced any couples’ sex life at that time.

And let me tell you, Mr Thornton does not disappoint 😉

The story is set during the course of one evening.

Margaret and Mr Thornton are forced to marry as a consequence of their actions during the riot.

Emotions are still running high, and they are both having to make some big adjustments to their life.

It’s an interesting take on sexual tension and Victorian sexuality in general.

Plus, who could resist the urge to touch a sleeping Mr Thornton?

Lavender and Ink by  FadingWinter

A quick one-shot in more ways than one…

Mr Thornton is alone in his office and can’t stop thinking about Margaret, so he decides to take matters into his own hands… *cough*

Sick of Shadows (chapter 1-8) by lettered

I really enjoyed this fanfic, although it was never finished (but a girl can hope!).

Poor Mr Thornton does the right thing and saves Margaret from ruin by marrying her.

This story is full of angst, and the misunderstandings are thick, but there isn’t much John’s love cannot conquer.

John Thornton, Look Back at Me  by Loyal Wynyard

You can also buy the book HERE.

John is tortured by the loss of the woman he so desperately loved, only to learn that things are much, much worse, as Margaret is now a married woman.

A Heart for Milton by Trudy Brasure

You can also buy the book HERE.

The is probably the most famous continuation of North and South, and I really enjoyed it.

This tale unfolds the joy, hope, passion, and fulfillment of the love forged between John Thornton and Margaret Hale as the reader follows their journey through the uncertainties of their engagement to the trials encountered in their first year of marriage …and beyond.

Only criticism? Mr Thornton seems to be a ig fan of the missionary position… just saying it like it is 😉

Master of the Mill by whatcatydidnext

I’m adding this to my rec list because it boldly goes beyond what we believe to be true about our beloved characters.

I hope you enjoy my recs and please feel free to leave yours in comments.

Have a wonderful Valentine’s Day!

Have a Heart on Valentine’s Day

First things first, THANK YOU to all of you who have already sent in your cropped features 🙂
I still need more of your face/body parts for my FanstRA4 project, so please send them my way!

Keep them coming please, and I WILL start cold calling (or emailing, as the case may be) to fill my needed quota of a hundred billion (more or less…).

Scrolling down at the post published at I Want to be a Pin Up, I really do look like a total Armitage creep/weirdo/call the police and get a restraining order, because it’s been RAining Armitage over here for months.

As part of Valentine’s Day I’ve decided to separate my posts into those that refer more to the official name of my blog, and those that are connected to the Armi-loony in me, which will be posted tomorrow.

Time for the Valentine’s Day Pin Up Girls 🙂

Some people are surprised I embrace Valentine’s Day so much, seeing that I’m single and jaded to the extreme, but I can’t help but support a day that’s all about love, in whatever shape or form it happens to be present in your life.

I wish you true romance  on the 14th of February, chocolates and long-stemmed roses from a passionate lover, champagne and some extra vigorous chandelier sex.

Then again, if you happen to be like me and you don’t even have a proper chandelier to hang from, I wish you the feeling of being loved by friends and family 🙂

I hope you have a steaming Valentine’s Day and remember, in the words of RuPaul:

If you can’t love yourself, how the hell you gonna love somebody else?!?!?

Themed Vintage Ads- if you dare…

These are for you Max!

Happy V-Day to my Mo from your faux wife!

O lady, when the tipped cup of the moon blessed you

You became soft fire with a cloud’s grace;

The difficult stars swam for eyes in your face;

You stood, and your shadow was my place:

You turned, your shadow turned to ice O my lady.

O lady, when the sea caressed you

You were a marble of foam, but dumb.

When will the stone open its tomb?

When will the waves give over their foam?

You will not die, nor come home, O my lady.
O lady, when the wind kissed you

You made him music for you were a shaped shell.

Since my heart heard it and all to pieces fell

Which your lovers stole, meaning ill, O my lady.
O lady, consider when I shall have lost you

The sea’s hands, dark from the world’s breast,

The world’s decay where the wind’s hands have passed,

And my head, worn out with love, at rest

In my hands, and my hands full of dust, O my lady.

And for the tux nuts… 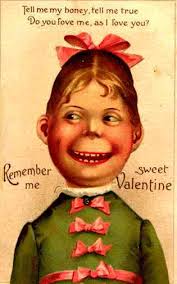 No matter how you like to celebrate Valentine’s Day- a mad cat, disturbing pear man, weird children, piggies or a man sitting on the loo, have a good one!

To balance out the weird, let me say: Happy RA is Way Hotter than Most Men Day!

It’s the time of the year when we gear up celebrate love. I personally shall buy myself a big box of chocolates (I’ve deserved it) and perhaps revisit some of my favorite RA romantic moments.

If you are in a relationship, you may want to surprise your lucky fella with a slow teasing dance and give him something to remember.

At this point I must encourage you to pop back to RA’s series where he takes off his clothes- only because the requires it, mind. You will find these in Spooks and Strike Back. Usually he removes his clothing in a swift move and there is little stripteasing per se, but I dare you not to rewind it a few times… COUGH… moving on…

Now, I must admit I’ve never actually done a striptease and have only ever seen it on telly, in movies and once I saw a Chippendales type of performance. It wasn’t good. To be honest, I think most of the ladies there were embarassed more than anything.

There’s just something about a man in a g-string that places him somewhere close to a nude man in socks (I have put a ban on the images of RA as Paul in Between the Sheets– just couldn’t get past the socks…).

It was hard to find a man imitating a Top Gun character, or a police man appealing. It just didn’t work for me at all.

BTW I just noticed Lucas has a tramp stamp, not that I was looking…

According to specialists, if you’ve ever thought of doing a striptease, the chances are that your partner has too.

Here are some tips to get it right:

Start your seduction with a titillating e-mail or call earlier that day, pop in a CD, turn the lights down low. Light candles and plunk your lovers bottom on the sofa. Put away your RA posters, Guy dolls and whatnots.

It’s all about attitude. Start parading around your man, making a figure of eight with your hips. Place one foot directly in front of the other. Keep you head up, chest out! Be bold, sassy, sensual. If all else fails, take a huge gulp of champagne.

Start playing with a scarf or, if you happen to have one, a feather boa. Apparently it represents a phallic object, but lets not get into that. You can run it over your shoulders, run it seductively through your hands. You can use it as a blindfold, put it around his neck to draw him close.

TIME FOR THE STRIP PART

Start removing your clothes. The key word here is slow. Turn your back to your man, look over the shoulder. Start unbuttoning, shrug your shoulders and do not drop your items of clothing with a thump on the floor. You can start throwing the objects at him, but beware of heavy zippers and buttons. You want to hurt him, but with your sexiness, not a black eye. When unzipping, arch your back and stick our your bum.

Word to the wise- do not get your skirt caught around your ankles. You will topple, you will fall, that will probably result in undignified humiliation.

This would be a good time to lay off the bubbly.

Keep the heels on. You can remove them when you start removing your stockings. You can ping the garter belt and slowly roll down one stocking, then the other. Need I remind you that tights (or pantyhose, as the Americans say) are not an option. I have heard men say there is possibly nothing quite so asexual as a woman who looks like Barbie down there 😉

Stripping should be like unwrapping a present, the wrapping sure can be pretty, but the real prize is underneath.

Take your undies off slow, teasing all the way. Once in the buff, it’s time to take a victory lap and strut your stuff. You’ve gone so far, be bold, not bashful. You’ve got so far don’t shy away!