Add a little Steampunk to Your Summer!

I’m still working on my thesis, but while I’m engaged, let me leave you with some book recommendations.

As some of you might know, I’m an avid reader, but I do tend to fall into one category of books, trying to read everything written by one author that caught my fancy.

Although most of my reading recently concerned my thesis (bless you Henry Jenkins!) or was fanfiction (again, bless you fanfic authors), I have also branched out to Steampunk books.

For those who don’t know,  Steampunk is a sub-genre of science fiction that typically features steam-powered machinery.

It’s often  inspired by industrialized Western civilization during the 19th century, in an alternative history of the 19th century’s British Victorian era, American “Wild West”, or in a post-apocalyptic future during which steam power has regained mainstream use.

It’s often described as retro-futuristic and features anachronistic technologies, with elements of fantasy, horror or supernatural.

It sounds more complicated than it is, I just describe it as a vision of the future in the past.

I think what draws me most about steampunk books is that they often have a headstrong heroin as the protagonist, one that has fallen upon hard times, struggles with the social conventions, but is resilient and brave.

I guarantee that these books will prove to be the perfect light summer reading!

They are action-packed and offer a delightful way to spend a beautiful summer day. 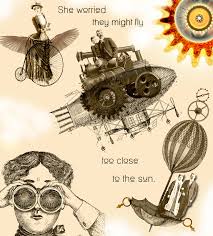 My choices may be on the girly side of the steampunk spectrum, but I promise you’ll have a delightful time!

Here are just some of my recommendations, so pop on those goggles, tighten your leather corset, get on board the next ornithopter, and set of on an adventure!

One of the first steampunk books came my way by accident, or marketing, whichever way you choose to look at it.

I kept passing a poster adverting Soulless on my way to work, and I found the cover intriguing enough to check it out (oh, the power of billboards…).

The series can be described as a  steampunk paranormal romance,  set in an alternate history version of Victorian England where werewolves and vampires are accepted as functioning members of society.

The protagonist Alexia Tarabotti is a woman with several critical problems: she is still searching for a husband, her late father complicates her social standing in a rigid class system, and she feels boxed into the conventions she must abide by.

There’s one more problem namely she has no soul.

The fact that she is soulless leaves her unaffected by the powers of supernatural beings which only further complicates her life.

The plot is juicy, even though I felt that with each book the author loses…errr… a bit of steam.

This is another series of books that I found utterly charming.

This steampunk adventure series follows the Lady Claire Trevelyan, born a Blood (aristocrat), but she has the heart, soul, and mind of a Wit (scientist).

The novels are set in an alternate Victorian age where the combustion engine has been a flop and steam-powered devices are capable of sending the adventurous to another city or another continent.

After a number of unfortunate events Claire finds herself the charge of a group of street urchins, and having to battle for survival, a warm meal, but most importantly her freedom. 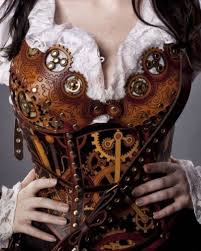 There are four books published to date, and the whole series will include seven.

Don’t judge the books by their covers, there’s more to the story than meets the eye, and the characters lure you in to the point where you find

yourself rooting for them, even a hen called Rosie 😉

If grittier is where you’d like to head, this book is definitely the way to go.
It’s the first novel in Priest’s Clockwork Century setting, although I haven’t gotten around to reading the others.

Early in the American Civil War, rumors of gold in the Klondike have brought would-be prospectors to North America’s Pacific Northwest. Anxious Russian investors commission American inventor Leviticus Blue to create a machine which can mine through the ice of Russian-owned Alaska.

Boneshaker, instead destroys several blocks of downtown Seattle and releases a subterranean vein of “blight gas” that kills anyone who breathes it and turns some of the corpses into rotters (non-supernatural zombies).

A wall is erected to contain the gas within the affected part of the city.

I really enjoyed this book because it broke the mold of the other steampunk novels I have read to date.

We still have a strong female protagonist but expect no pretty corsets or charming hats with feathers.

If science is your thing, but you could do without the sci-fi, instead you prefer a good old juicy murder on the side, I highly recommend this series.

It’s not a steampunk series per se, but the teenage protagonist Flavia could give Sherlock Holmes a run for his money and displays a love for chemistry and gruesome murders.

Not many 11-year-olds from posh families get to ride the countryside on their bicycle courting danger, but no one does it better than the more than a little annoying, but wickedly funny Flavia.

I loved the first four book and the last one is waiting for me like a delicious dessert!

The final book is yet to be released.

I hope you enjoy my summer reading recs and as I continue reading, I hope to come up with some more 🙂