Sir PJ, I have a bone to pick with you about The Hobbit…

I think it’s time that I write down my thoughts on The Hobbit as most of my readers have probably seen it.

Before I move on I’d just like to add that I’ve seen the film twice, so I really don’t feel like I can go into detail on the story as I still find the multum of plots overwhelming.

Anyway, this post will be about something that really bugged me the first time I saw the film and not a full-blown review.

As you know, I ended up seeing The Hobbit in Odeon in Leicester Square in London as the big man (meaning Sir PJ) intended, meaning HFR 3D.

All 3 Hobbit movies were shot by capturing 48 frames per second rather than the film industry standard 24.

This means that a HFR movie has less motion blur and has crystal clarity.

What happens is the end product stops resembling a movie and looks like a HD TV program.

And it drove me absolutely nuts.

At times I felt like instead of the ‘cinema’ look, I got a Discovery Channel HD documentary.

I felt like the new technology had actually stripped the movie from its big screen magic.

Don’t get me wrong, the less blurs on Thorin and Kili, the better, but the end product distracted me from the story.

I respect Sir PJ’s drive for technological advancement in the motion picture experience, but it’s a shame no one stood up and pointed out that he has a wonderful story, a great cast, the success of the LOTR trilogy egging him on and sometimes less in truly more.

I share a similar thought on the 3D aspect.

Was it really vital for the story?

I haven’t seen The Hobbit in 2D so I can’t pass judgment, but I’m venturing a guess that the beautiful images and enthralling acting will stand alone and capture the viewer’s attention.

After all, the dwarvish tale is no Avatar.

I really wish Sir PJ had gotten rid of all the bells and whistles and trusted in the movie he could have made.

What do you think?

Have you had a chance to see The Hobbit in HFR 3D?

Just when I think I’m out, they pull me back in…

I’ve decided to cut down on the ‘nuts’ regarding The Hobbit and focus on other things till mid December.

You might say I’ve put myself in a Thorin time out as it’s getting crazier by the day.

I started feeling a bit annoyed with all the merchandise on offer and the expectation that I’d want to spend any money before I know if the movie is any good.

Yes, I know the film will be amazing, but I’d like to be given a chance to make my own mind.

I really just want to see the film as oppose to reading about it and being teased with it.

Just when I thought I’d be keeping my cool, I came across the images from EMPIRE Magazine Cover.

They really aren’t making things easy on me 🙂

The images are mesmerizing and makes me think that Sir PJ is using some witchcraft to get us all hooked.

By the way, I’ve come across my first Polish poster and it was extremely underwhelming and here’s why.

Firstly, the only image I’ve seen is of Gandalf.

It’s not that I don’t like the quirky wizard, but he’s no Thorin.

Secondly, check out what it says at the bottom of the poster.

How very dare they!!!

I’m not sure what that says about me, and I think I’d actually care if I wasn’t busy with all the laughing 🙂

Here are some connected with Tolkien films.

Hope you have a wonderful Silly Sunday!

And here are some other funny finds: 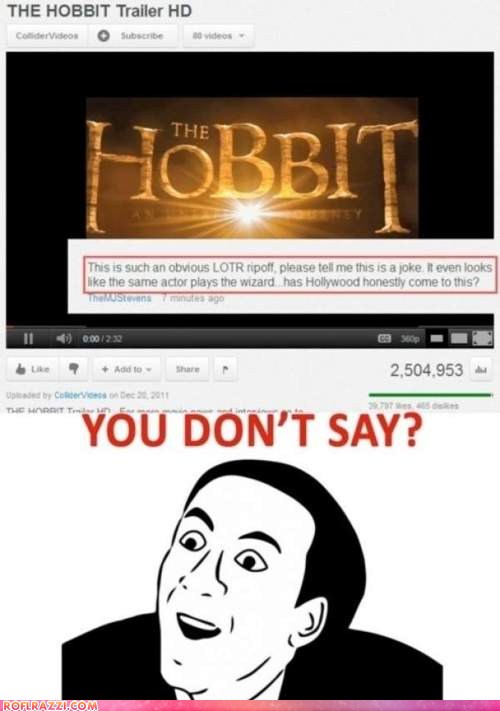 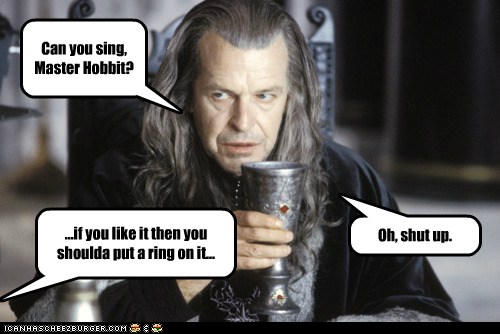 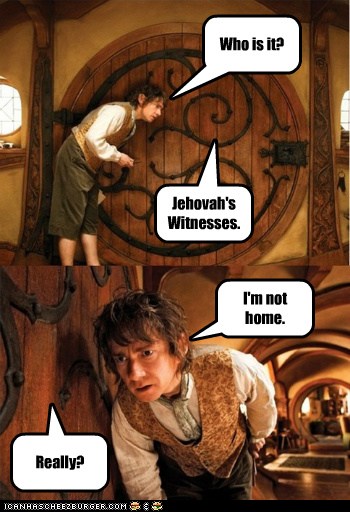 While I was looking for ecards I came across this story of school kids  from London releasing their own version of The Hobbit months before the official film premieres.

They even splashed out on a CG dragon!

I though this was a lovely story and reminded me of how Richard Armitage mentioned playing an elf when he was at school.

Have a wonderful Sunday!