If Sheriff Vasey was high in Nottingham, that would explain a thing or two…

I was meaning to write about this story over a month ago, but it got side-tracked.

It seems that Keith Allen, who is constantly described by British tabloids as ‘Lily’s Dad’, will be taking a cocktail of Class A drugs on British  TV.

Allen, who has a history of drug use, will be under strict doctor supervision.

This will be part of Channel 4’s Drugs Live, a program, which will be screened in the Autumn, that will examine the effects drugs like cocaine, marijuana and ecstasy have.

You can read more about it here.

I really don’t have an opinion regarding the program, and will reserve judgment until it airs, although it does seem like a very controversial idea, and no doubt will bring in plenty of viewers.

In a world where having sex live on Big Brother, and selling booze at petrol stations, is apparently OK, some may regard this next step as natural. 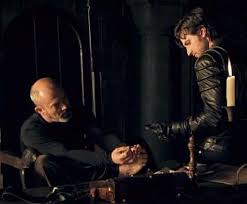 It did however get me thinking of Sheriff Vasey.

I wonder if Allen drew upon his experiences to add that note of drug-infused madness to the character.

An addiction to some mood-altering substance could explain his volatile behavior, controversial ideas, and why he was so prone to violence.

There’s a twinkle of madness in Vasey’s eyes.

Of course, his temperament, and horrible behaviour towards Guy of Gisborne, could simply be the result of a thoroughly nasty character.
Maybe the sheriff’s simply high on life, and drunk on power!