A Discovery of Witches and a perfectly vampirical Armitage

I know I promised you the results of the RA Silent Auction this weekend, and I’m bursting to wrap things up and share the final tally, but I’m still waiting on a transfer from a winner who has just opened up her Paypal account and banking stuff is making her, me and us wait.

Secondly, my usual posts like Arty Farty Friday and Stereotype Sunday will be suspended for December.

There’s so much happening in the RA world, not to mention my trip to London this Wednesday and Christmas right around the corner, there’s only so much scheduling a blogger can do.

Last but not least, I’m very excited about the Berlin première tomorrow!

I wasn’t too enthralled with the world premiere (sorry LA), and I really hope that we Europeans can muster up some more energy and welcome The Hobbit: Desolation of Smaug with less of a fizzle and more of a bang.

I’m counting on my RA friends to wave the flag, take plenty of pictures and report back 🙂

Rarely do I read a book and a character jumps out as one that would be perfect for Richard to play.

I’ve often wondered how I would feel about Elizabeth Gaskell’s North and South had I read the book first and saw the BBC series second.

Of course I’ll never know, but I’m pretty sure Armitage for Thornton and Daniela Denby-Ashe for Margaret wouldn’t have been my obvious casting choice and yet they worked perfectly in the series.

I’ve heard Armitage Admirer sharing which protagonist they’d like to see Richard portray on screen, but the one that stuck with me was the character of Matthew Clairmont  in A Discovery of Witches. 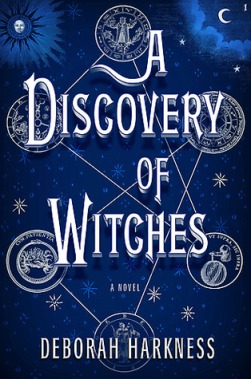 The Debrah Harkess book had been lingering on my Kindle for some time, always “the next book to read after I finish the current one”, I kept overlooking it until a few days ago.

I’m not sure if all the fandom chatter that Armitage is perfect for Clairmont actually swayed my judgment, but holy cow, Armitage is soooo perfect to play the dashing ancient vampire.

For those who have not yet read the book (I’m in the middle of it, so no spoilers please!), you can find the synopsis here, but I’ll focus on why Richard would be perfect for the part.

By the way, the film rights to the book were purchased by Warner Bros., but I haven’t found any details as to what their plans for this project is, nor have I dug up any info regarding the cast, so a girl can dream 🙂

Before my dear readers start complaining that I’d dare wish for Richard to be cast as a vampire, this book is not your run-of-the-mill paranormal juvenile book where girl meets vampire, they fall in love, he wants to kill her stuff.

Professor Matthew Clairmont is an ancient vampire who looks like he’s in his 30s and is gorgeous: very handsome and tall, with wide shoulders and narrow hips, athletic and sturdy.

Did I mention Matthew does yoga?

He’s a scholar, stylishly dressed in expensive garb who drives an expensive old car and is a wine connoisseur.

He’s also ridiculously charming and has the air of a gentleman from a bygone era.

At this point of Matthew’s description I think his similarities to John Thornton are obvious.

And it doesn’t stop there: Clairmont is incredibly protective of the woman he falls madly and dangerously in love with (or, as the book describes, he’s mating her).

He’s enthralled with Diana, very much like Thornton is with Margaret, delighting in her scent and going out of his way to keep her safe, even against his better judgment.

He’s torn between his deep feeling for her, who he is at the very core and the danger his emotions could entail.

His passion for the woman he loves drives him half-mad, especially that it’s the first time he feels so strongly about another being, despite having relationships in the past.

A chunk of what I’ve read so far takes place in the Bodleian library in Oxford and what a lovely setting it is for the plot.

An Armitage aficionado will ask which of Richard’s incarnations best suits Clairmont physically.

The obvious choice would be either season 8 Lucas North or John Mulligan, but in truth I see Matthew just as Richard is now, out and about promoting DOS, with his comfy cardigans and Hugo Boss jumpers, his hair a little longer, a smile fixed on his face.

I can only hope, against all hope, that if/when the casting for A Discovery of Witches rolls around, Richard Armitage’s name will be included in the mix.

If you would like to check out why Richard is perfect for the part of Matthew, go to Armitage 4Clairmont.