I know little about religious matter, and care even less, so any inaccuracies pointed out will probably just be shrugged off by me, or in the words of a Catherine Tate’s character “Am I bothered?”.

This isn’t a post written by a Christianity/Dante specialist/enthusiast nor is it intended as a religious or ethical debate, just a little light musing, so keep it clean, don’t make it mean 😉 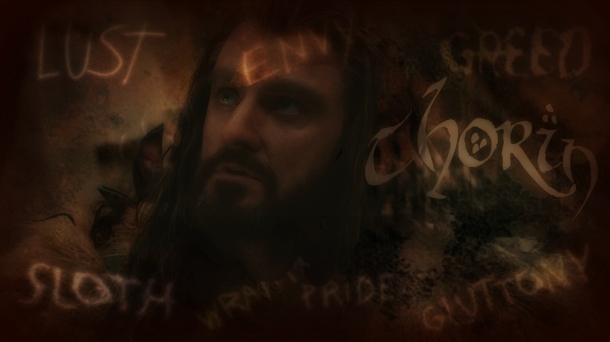 Dante Alighieri’s epic poem The Divine Comedy (you may have heard of it, it’s a cheerful piece of writing, even Dan Brown agrees and used it in his latest book Inferno) lists the seven deadly sins.

I was going to find RA characters that were guilty of committing them, but one name kept on popping up in my head.

That Thorin sure is a naughty dwarf!

Let’s go down the list and see how he fares when put to the test.

Lust is described as an intense desire and Thorin is certainly guilty of that.

This want includes money and power.

According to Dante’s Inferno, the sinner is blown about in brutal hurricane-like winds, which symbolises their lack of self-control to their lustful passions in earthly life.

Black Sky/ Into the Storm anyone?

This can be interpreted in different ways.

On the one hand, gluttony means overindulgence of meals, and the constant eating of delicacies and excessively costly foods.

So in other words, it’s simply being a dwarf…

On the other hand gluttony can be interpreted as selfishness, putting your own needs ahead of those of others.

This point is debatable as Thorin is no doubt a good leader to his people and has sacrificed a lot to ensure their survival.

Having said that, there’s this selfish need to reclaim what his ancestors possessed knowing that he’d have to sacrifice lives in the process.

This leads us to…

I think we’re going to see $$$ in Thorin’s eyes the closer he comes to the mountain.

We know that greed will start consuming him as it did his grandfather.

Greed includes the hoarding of materials or objects, theft, especially committed by way of violence or trickery.

It’s also the manipulation of authority.

In Dante’s Purgatory, the punishment is to be laid face down on the ground, bound  for having concentrated too much on earthly thoughts.

Is that like being tied up in sacks by trolls?

This is one of the sins I couldn’t really make stick to poor Thorin.

Sloth is sometimes defined as physical or spiritual laziness.

It can also be seen as not doing the things one ought to, a failure to utilize one’s talents and gifts.

If Thorin’s talent is to be majestic, he’s succeeded on all fronts.

It is described as an inordinate and uncontrolled feelings of hatred and anger, self-destructiveness and violence.

True, Thorin’s enemies are difficult to like and they’ve been naughty in their own right, but Oakenshield hardly seems like the type to turn the other cheek and let bygones…

Just like greed and lust, envy describes an insatiable desire.

The punishment is particularly nasty as the inner has their eyes sewn shut with wire because they have gained sinful pleasure from seeing others brought low.

Does “others” include dragons, if so Thorin is guilty! 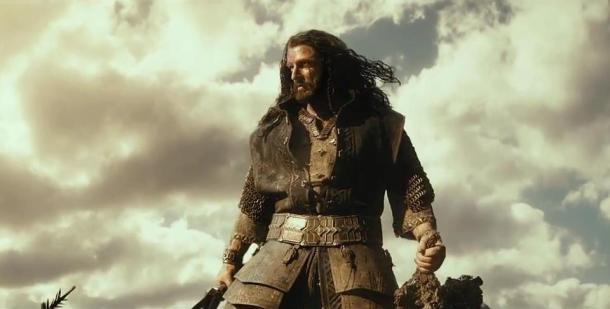 Seen as the most serious sin (seriously…), is describes a desire to be more important or attractive than others.

The sinner doesn’t or cannot acknowledge the good work of others, but also portrays an excessive love of self.

With Thorin, where does being majestic stop and being prideful begin?

The penitents are forced to walk with stone slabs bearing down on their backs to induce feelings of humility. 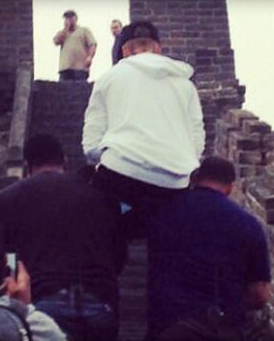 If I may, I’d like to suggest adding an eighth deadly sin:

This is one sin Thorin is majorly guilty of.

And to make us fall for a dwarf, of all the hairy smelly creatures to roam Middle Earth, how rude!

The penance is obvious: giving massages to all willing females (hopefully washing hand in between…).