Make your own Hobbit Wallpaper + Dwarves that brighten up the day!

Every day something new and exciting pops up in the Hobbit world.

Warner Bros gives you the opportunity to make your own desktop and mobile wallpaper, profile icon, Facebook cover, or Twitter skin, using the amazing panorama image.

It’s easy to use, and really fun.

By the way, Heir of Durin has posted images of posters from Comic-Con.

These especially sent my pulse racing 🙂

I think our worries that Richard Armitage won’t look like himself can be put to rest.

Thorin is one irresistable and regal dwarf.

And he seems to have regained RA’s best features!

I really can’t resist a guy with wavy black hair, and a sexy Irish accent.

When I saw the following image I thought: How the heck am I going to fit that in my bedroom?

I could always use the sword as a scarf rack.

Does he come with an assortment of accessories and different clothes?

More importantly, does it have the Ken problem down below?

Dreamers in the RA community have suffered a hard blow this week.

That’s why I though a post on my favorite dreamer would lift our spirits. 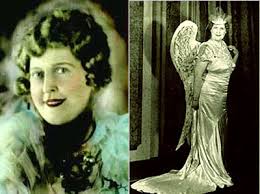 She was ridiculed for her lack of rhythm, pitch, tone, and overall singing ability.

Her desire to study opera was rejected by her wealthy father, but when he died,  Florence inherited sufficient funds to start her singing career.

The only problem was, despite what she believed about herself, she could hardly be regarded as a talented singer.

Her operatic repertoire was well beyond her technical ability. Jenkins apparently was convinced of her greatness, and often compared herself to other great opera divas of that time.

After a taxicab crash in 1943 she discovered that she could sing “a higher F than ever before”, and sent the cab driver a box of expensive cigars.

She believed in herself, and loved to perform in front of perplexed audiences.

Florence regarded the audience laughter during her performances as “professional jealousy.”

She often wore elaborate costumes during her performances, all paid for by the money she had inherited from her parents.

Sometimes she would done a pair of wings and tinsel.

She was famous for throwing flowers into the audience, which were later collected for the next performance. Once, in her enthusiasm, she apparently threw the whole flower basket at the unsuspecting spectators.

When she recorded, she would only sing an aria once, deeming it perfect as it was.

She was quoted as saying:

“People may say I can’t sing,but no one can ever say I didn’t sing.”

She wasn’t a good singer, but she had a dream, and the courage to live the way she wanted.

We could all learn from that!

One of the greatest Polish actresses, Krystyna Janda, has played Jenkins in “Boska” for some years now, much to the delight of audiences.