Happy 4th of July to all of you who are celebrating!

I re-watched  Moving On: Drowning not Waving yesterday, and I can only conclude that anything that features Richard Armitage needs to be seen at least twice.

I’m not referring to the man himself. I can’t tell you how many times I’ve seen N&S just to see him smouldering on my screen.

This is related to the fact that when you watch something with RA acting, you’re so focused on him, you miss many nuances of the plot.

I had a similar thought when I re-watched Sparkhouse.

It turned out, there was a plot besides Poor John – a very interesting one indeed.

John Mulligan (played by Armitage) is hot beyond anything. I admire the cheeky grin, the smart casual clothes, the adoration of Fish & Chips.

Once you look beyond that, you learn that John is a predator.

He preys on the weak and the injured.

Elie (Christine Tremarco) has reached a deadend in her life. She’s heavily in debt, living well beyond her means.

She’s lonely, which is exemplified by the seemingly perfect life her best friend leads.

She seems discontent. Worse still, she is waiting for a Prince Charming to swoop in and save her.

This notion is particularly painful to watch, and more than a bit annoying. If she had been stable in her life, if she realised that salvation is within herself, the charminly dashing John would not have been able to take advantage of her. 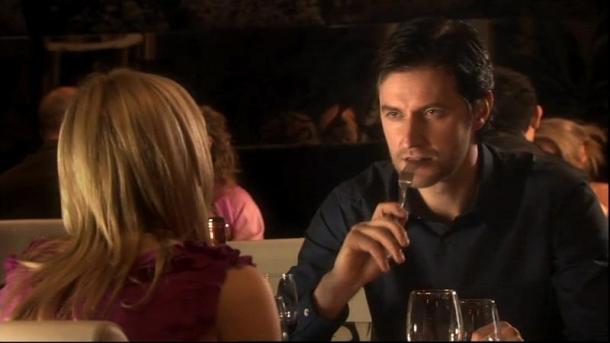 John dones a mask to become all that she feels she needs.

In many ways he is the perfect con artist. He’s able to create an environment in which she discards her basic survival instinct, silences her intuition.

One could say it is not only human nature, but the nature of all social primates to have contradictory emotional impulses toward the weak.

On the one hand, John seems genuinely willing to offer Elie support, to help her with her financial woes.

On the other, he takes advantage of her weakeness. Perhaps he felt that altruism was beyond his capabilities as a human being.

What happens when we dismiss the notion of taking advantage as an aspect of human nature?

This would mean that it is a sign of the corruption of human nature.

This certainly fits in with what we know about Mulligan.

He was the bad boy of the school, the troublemaker, raised in a rough neighborhood, in less than perfect circumstances.

Elie is weak, there can be no doubt about that, but John could also be seen as such.

He doesn’t believe he can sustain himself through honest actions.

One may argue that only the weak prey on the weak.

John’s weakness is most evident in the last scene. It’s not that he’s in police custody. It’s the fact that he tries to place blame, to share the responsibility for his actions. His logic is that Elie had also enjoyed the benefits of the drug money.

He doesn’t try to exonerate himself. He needs her to be as bad as he is.

He tries to make her an active participant in the corrupt system.

If you haven’t seen it, here a clip to whet your appetite: