The advertising world had definitely seen the value of that beautiful silky voice housed inside the beautiful temple of flesh called Richard Armitage.

You may suddenly develop a thirst… of sorts…

You may find banking fascinating!

Oh shock and horror, cars may pick your fancy!

And here’s something to put a smile on your face.

Nobody sees a flower really; it is so small. We haven’t time, and to see takes time – like to have a friend takes time.- Georgia O’Keeffe

I’ve been preparing for my History of American Art exam.

Of my most favorite artists is Georgia O’Keeffe.

She is best known for her dramatic paintings of gigantic flowers and sun-bleached desert bones.

She started painting flowers 1918, but it wasn’t until 1924 that she painted magnified images of blossoms.

She painted roses, petunias, poppies, camellias, sunflowers, bleeding hearts and daffodils as well as  rare blooms such as black irises and exotic orchids.

One of the flowers that she regularly treated in larger-than-life format was the calla lily.

Wake Up with Lucas North!

If you are perhaps feeling a bit like Lucas this morning…

Have a wonderful and Lucas filled morning!

Posted in Uncategorized. Bookmark the permalink.

I’m still on a bit of a John Porter high and I’ve been thinking of all the obstacles he’s had to overcome… only to be shot in the head!

Here are a few:

His wife and the hormonal teenage daughter

No sane woman would reject Porter, especially when he’s travelling halfway around the world on missions. He was out there risking his life to earn money for that ungrateful family.

As good as Porter looks bloody and sweaty, there should be a law against damaging that beautiful face.

With the amount of backstabbing, it’s a wonder Porter even got out of bed.

I can understand that for men sex is sex, no matter the motive. But you can’t feel too good about yourself when you find out a woman slept with you because she was ordered to do so.

The curse of the dodgy wig

This is too painful to even write about… 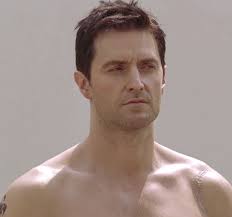 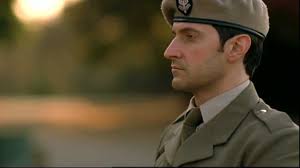 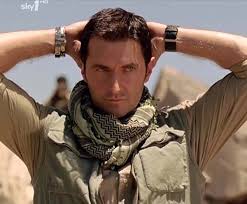 The days are getting so wonderfully long and warm, I thought it was time to celebrate with a bunch of Navy, Sailor  and neutical Pin-Up images.

I hope everyone is in shipshape condition to enjoy this beautiful Sunday!

Make sure to catch the wind in your sails, so it carries you through next week, till the next weekend 😉

Damien Hurst and the Sensation Shark

I wasn’t going to write about Damien Hurst as he has become a household name.

The papers screamed about his sensational art including pickled cows, sheep and sharks, Charles Saatchi, among others, was willing to drop a small fortune on his works. He has become the go-to artist of hedge-fund billionaires.

Then I thought that I cannot write him off simply because his art goes for $40 m plus.

This piece is titled ‘Physical Impossibility of Death in the Mind of a Living Person’.

To be honest the title is self-explanatory.

It’s a strange brush with death, as you observe a shark in formaldehyde from all angles.

The animal seems to be suspended in the glass casing.

I found this piece to be an interesting commentary on how we- humans approach nature.

The shark is dead and still in the water, so to speak.

It is reminiscent of beautiful butterflies pinned to a backdrop.

We are able to observe nature up close, but without the energy of life, we are missing a vital element and are left with mere physical shells.

I think it says a lot about our lack of appreciation of nature, the need to, as The Book of Genesis states, name and own it instead of coexisting.

The piece that resonated with me more were the two sliced cows, divided by vertical cross-sectional cuts into 12 seperate segments. They are held upright in formaldehyde , with each element placed in its own glass case.

This meant that you were able to walk in-between the animal, so to speak.

In some ways you have the feeling of violating the animal by strolling right through it, so to speak.

It’s interesting to observe the cross-sections, but also a bit iffy.

Ron Mueck is a photo-realist artist.

We value artists for their interpretation of  reality and for their unusual way of portraying it.

Mueck does the opposite.

It’s his unnerving accurate depiction of humans that makes his works so fascinating. On entering one of the rooms you find a naked man lying on the floor.

When you move closer you realise the man is dead.

On the one hand the eerily lifelike sculpture draws you in and you find yourself analyzing the detail.

This is accompanied with the feeling of shame.

After all, the body is nude and, by being an observer, you are committing a grave offence and breaking the taboo of nudity and death.

The concept is disturbing and unsettling.

A strange form of relief follows in the next room.

Here, the deceased father is portrayed as an angel, albeit a bit bored.

This sculpture offers a form of catharsis.

Other Mueck pieces are also fascinating.

They aim to capture important moments in our life, both the beautiful and the painful.

They say a lot about our fears and anxieties.

Here are a few of my favorites:

Marcus Harvey and a murdurous Sensation

I remember hearing about the Moors Murders when I was growing up in Manchester.

Ian Brady and Myra Hindley were convicted of murdering children in 1963 and 65 in the Greater Manchester area and burying them on Saddleworth Moor.

To me they represented ‘the boogie man” who hid under the bed, the evil that harmed children.

This painting, Myra by Marcus Harvey was one of the most controversial paintings exhibited, and that’s saying a lot!

What is interesting is that during the NY show it went unnoticed. This is largely due to the historical and cultural context.

It is a painting of a magnified image widely recognised in Britain, as it has been published in many newspapers in

This black and white image is a replica of the police photograph, taken at the time of her arrest.

The painting, shocking in itself, takes on a new dimension when you look closer and discover that…

it is made up of children’s handprints.

This realization that the image of a murderer had been created by a child’s open palm print sends a shiver down your spine.

Harvey has explained his work as inspired by the obsession of the mass media as well as the inadvertent creation of iconic images by the press.

In other words, it is the press that is responsible for Myra Hindley’s notoriety.

Here is Kate Moss in a piece by Russel Young

Gil Elvgren’s Real Woman In a Pin Up Girl Reality

I while ago I wrote a posted a piece on how Pin-Up artists like Gil Elvgren were inspired by real women.

It was a case of: from photography to painting.

I adore watching how they reinterprit the features and give them a Pin-Up twist.

Posted in Pin-Up and tagged Blonde, brunette pin up, Gil Elvgren, Pin-up, Pin-Up girl. Bookmark the permalink.
← Older Posts
→
I Want to be a Pin Up
Create a free website or blog at WordPress.com.
Loading Comments...
%d bloggers like this: